I change breakfast habits ~2x/year. I have two breakfasts I switch between. The first is two fried eggs, over easy, with toast. For toast I prefer Trader Joe’s sourdough sliced bread, for eggs I’ve settled on Vital Farms’ Alfresco Eggs. They are very pricy at $6.50 / dozen, but these eggs have beautiful deep yellow + very creamy yolks. This not only looks and tastes fantastic but is proof of chickens that eat, and are, healthy. I fry the eggs in about 3/4 tbsp of salted European butter (Kerry Gold or President). American butter is not very good.

During my non-egg phase I have yogurt with fruit and granola. It breaks down like this: 1/2 apple (honey crisp or similar) in small chunks, 1/2 cup of yogurt (full fat yogurt, of course – I like Brown Cow cream top), 1/3 cup of bran buds, 1/3 cup of granola and a squirt of agave syrup. The weak link in all this is the granola. Store bought granola sucks. It’s either reasonably priced but a sugary unattractive non-clustered mess, or it’s okay but costs $10/lb.

Granola is not rocket science. It’s oats, some nuts, some sugar / honey and whatever else you feel like including that benefits from sitting in a 300 degree oven for 45 minutes. So I took to the internet for some inspiration. This is what I ended up with:

Prep is a one-liner: preheat oven at 300 degrees, mix everything except the cherries in a big bowl, dump on a lined baking sheet, and stick in the oven for about 45 minutes, stirring things up 2-3 times.

Let let dry on the sheet, break up a bit (leave some good clusters though!) and mix in cranberries.

Some things I found useful: 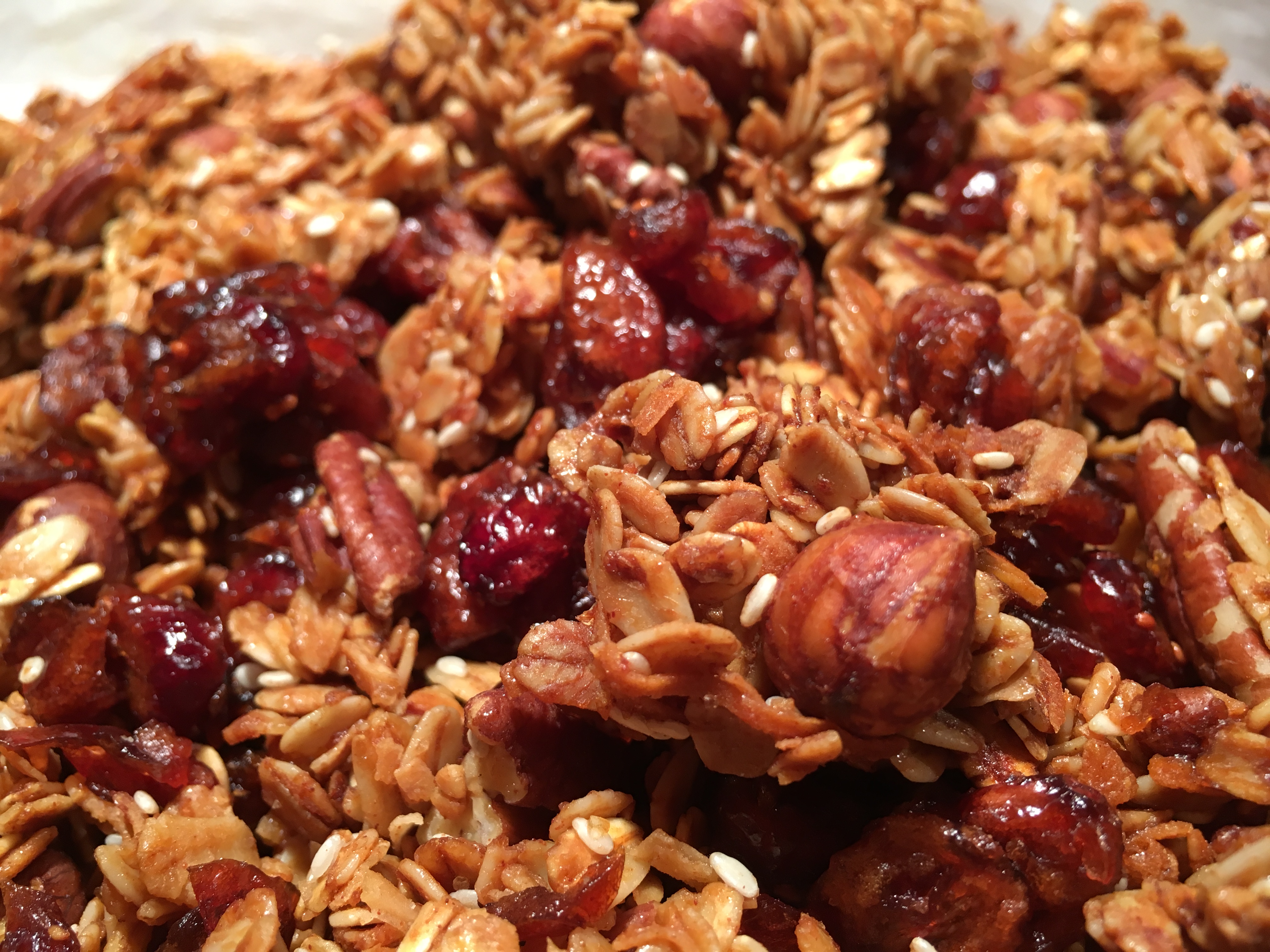 Look at this clustery goodness!

Ingredient cost is around $5.50. With a yield of just over 2lb this works out to $2.25/lb. That’s about on par with a box of substandard unhealthy grocery store cereal, and much cheaper and better than any of those artisinal comic-sans cereals that are marketed with laser focus on the gullible Whole Foods shopper.

The recipe is mostly inspired by this one here.