Back in 1994-5, a friend of a friend quit band life, and was selling his 1978 Fender Rhodes Mark 1. I didn't know a whole lot about the instrument, but I knew I wanted a keyboard instrument to play at home. So I bought it off him for something like 500 guilders, or about €325 in today's money. When I came to pick it up, I was surprised that it weighed almost 80kg (175lbs)! I'm glad I brought a friend and a car!

After setting it up at home and plugging it into my Roland Jazz Chorus guitar amp, I was immediately in love with the unique, warm sound. Even back then it was in pretty bad physical shape, but the mechanics all worked, there were no dead keys, so I was happy with it. Happy enough that I never really looked at the interior closely, let alone take it apart.

In the years that followed, I played it at home and gigged with it some. I realized the action was not consistent, and on some keys outright bad, but still I never seriously considered taking it in or trying to fix it myself.

Getting ready to move from Amsterdam to Salt Lake City in the summer of 2011, I knew I didn't want to bring a lot of stuff. But there was never any doubt in my mind that the Rhodes was going to join me. It was by far the heaviest and bulkiest item I included in the move. Settling into my new U.S. / SLC life, I was happy to still have it around, even though I played it only very occasionally in the following years. Again, I didn't give much thought to restoring it.

Until now! It was the Get Back! documentary I watched over the holiday break. Days into the sessions, The Beatles brought in Billy Preston, and together they started experimenting with an early "silver top" Rhodes. Billy, and the Rhodes, helped inject much needed new energy and inspiration to the contentious studio sessions, and added warmth to new songs like "Don't Let Me Down". Watching this, I realized again how much I love the Rhodes sound!

Listen to Billy Preson on YouTube. "You're giving us a lift, Bill. We've been doing this for days!" -- George Harrison

So, Let's Get Started

Having very little knowledge about how a Rhodes piano actually works, and absolutely no experience with fixing one up, the very first step is information gathering. I need to know what I have to work with, and where I can go for advice and, if needed, parts.

What do I have?

I knew a precious few things: it's a Fender Rhodes Mark 1, it was built in 1978, it looks kind of rough, and it plays, but not great. Oh and, it smells a bit musty when you take the lid off. 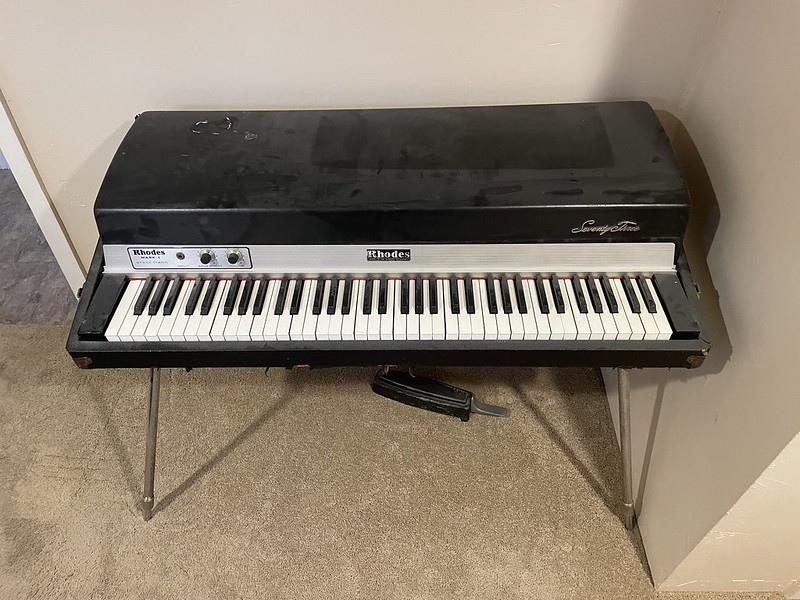 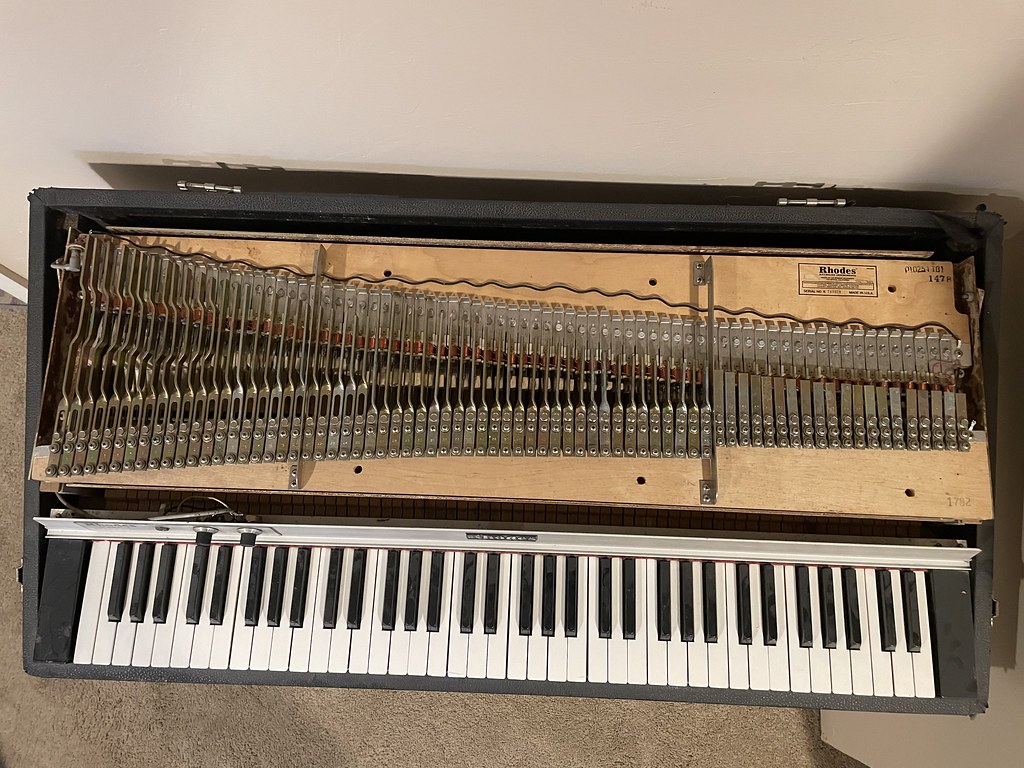 The first thing I notice (again) when I take the lid off is the musty smell. I think in part this is just because it's a 44 year old instrument that's made in part out of wood. But there's also bound to have been some mildew / mold build up in the past, especially when it was still in the humid climate of The Netherlands. From what I can see without taking it apart there is no actual wood rot, however.

The metal rods of different lengths you see lined up across the width of the instrument are the tone bars. When you hit a key on the keyboard, a plastic hammer with a rubber tip hits the corresponding tone bar which, together with a connected tine below, produces the vibration that is then translated into a magnetic signal by the pickup underneath. So the tone bar / tine units are essential to the sound of the instrument. We will have to see in how good of a shape they are, but for that we'll need to open the Rhodes up more. Casual inspection shows no real bad corrosion. Phew.

There is some visible corrosion in other places, which I am worried about. But before I continue, I need to take some time to look around for places on the internet where people who have done this before gather.

Where can I get help?

I like to try reddit first. There's some great and helpful communities there. Reddit has a Fender subreddit with occasional Rhodes postings, but it's mostly about guitars and basses. There's even a more specific Fender Rhodes subreddit but it's not very active.

So (reluctantly) I turn to Facebook, which turns out to have a thriving Fender Rhodes Restoration Group! Seems like a great place to start asking some questions. I posted about my corrosion worries and had some helpful answers within hours! Great group of folks there, and friendly to newcomers who don't know the first thing about restoring a Rhodes!

With that group bookmarked, I started gathering some more resources I can use. A few that I'll probably be using a lot:

That's plenty for this part of the Rhodes restoration journey. Next step is to start taking the instrument apart. It will get interesting!